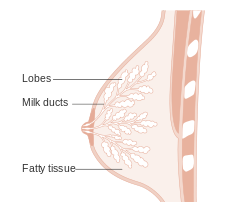 Diagram of the structure of breast. (CRUK/WC)

The breast is an important organ that pathologists see quite often because it is often afflicted by cancer. Before women started smoking in large numbers, it was a leading cause of cancer death in women.

Fortunately, breast cancer, in this day, has a relatively good prognosis if it is detected early.

Radiologic screening is less effective in younger individual as:

Work-up of CNBs is dependent on the clinical abnormality:[1]

Note - if you have a high BI-RADS score on the biopsy requisition, and no correlating histologic findings, be sure to correlate with the specimen radiograph, consider leveling the specimen to exhaustion and/or note the lack of a correlating lesion on your report.

Lumpectomies are usually oriented with short and long suture; short is typically superior (aspect) and long is typically lateral (aspect).

The key to breast pathology is the myoepithelial cell.

This includes the in situ lesions - DCIS and LCIS.

This is includes descriptions of the usual types... and the not so common ones.

The breast has lots of benign things. Unlike the prostate, the where benign is called benign, everything has a name. It is more common among breast pathologists to sign-out things like: apocrine metaplasia (benign), columnar cell change (benign), and florid epithelial hyperplasia of the usual type (FEHUT) - instead of - benign breast tissue.

Lesions with increased risk of malignancy

This section (below) covers stromal lesions of the breast, which vary from benign to malignant. The most common is (the benign) fibroadenoma.

Non-breast stroma stromal lesions are covered in the soft tissue lesions article. Angiosarcoma (dealt with in the vascular tumours article) is the most common (non-breast stroma) sarcoma of the breast, and classically arises after treatment for a breast carcinoma.

Like in all niches of pathology... there is weird stuff.

Not to be confused with microglandular hyperplasia.

Granular cell tumour of the breast