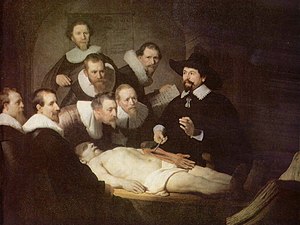 Autopsy was once a mainstay of pathology. It is now in decline and uncommonly done. Fetal autopsy is dealt with in a separate article called fetal autopsy.

One large review in JAMA suggests that approximately:[2]

If the executor of the estate is not specified the hierarchy is as follows:[3]

There are turnaround time standards from the College of American Pathologists:[6]

Body should be examined for defensive-type wounds:

Before the first incision

If there is suspicion of pneumothorax - one the the three following can be done:[9]

Retrieval of the (organ) "pluck"

These are worked-up in great detail in Germany.[19] In Canada, the examination, by comparison, is superficial. A detailed examination of the larynx may offer significant information in asphyxial deaths.

Things to think about

Extraction of the brain

Considerations for the retension of the brain (for prolonged fixation):

Not up-down anatomically oriented (top down):

It's the at the pathologists discretion. In decomp cases it is reasonable to submit nothing.

A standard (minimum) for adult homicides is:

A standard based on a Toronto teaching hospital:

Cause of death (in a negative autopsy):