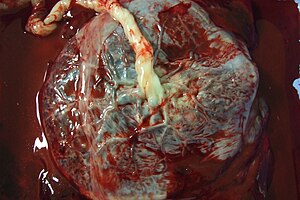 The placenta feeds the developing baby, breathes for it and disposes of its waste.

The organ is one that seems to be left behind; at least one review suggests it isn't done so well by general pathologists.[1]

Placental pathology redirects to this article.

Examination of the placenta

Indications for exam by pathology

Some indications for exam by a pathologist:

A more detailed list is given by Hargitai et al.[3] and Chang.[4]

Most common reasons for submitting a placenta to pathology:[5]

DDx of bleeding in late pregnancy:

This is often very quick. The gross is quite important, as some things cannot be diagnosed microscopically.

It is considered routine to obtain a mass for the placenta. This is usually done when the placenta is fresh and with the membranes and cord trimmed, as most tables of placental mass were created with these parameters.

Based on the table in the AFIP book[16] one can generate the following regression lines:

Extrapolated from the linear regression (see above):

Lame causes of a heavy placenta:

The pathology of the placenta is diverse and is not easy to group.

It terms of remembering things. It is probably easiest to take a combined anatomical, etiologic and morphologic approach.

What should be commented on...

Squamous metaplasia of the amnion

These are often submitted... even if they are normal. In these specimens, usually, the chorion is the key.

Diseases of the placental attachment