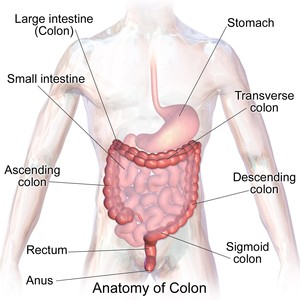 Anatomy of the colon and rectum. (WC)

The colon is section of the large bowel. This article also covers the rectum and cecum as both have a similar mucosa.

It commonly comes to pathologists because there is a suspicion of colorectal cancer or a known history of inflammatory bowel disease (IBD).

A conversion between named segments and distance - as per NCI of the United States:[1]

Infectious colitis in the immunosuppressed:

Polyps are the bread & butter of GI pathology. They are very common.

The bread 'n butter of gastroenterology. A detailed discussion of IBD is in the inflammatory bowel disease article. It comes in two main flavours (Crohn's disease, ulcerative colitis).

Features helpful for the diagnosis of IBD - as based on a study:[14]

This section covers non-specific colitides that appear to have an infective etiology.

Done if the patient is immunosuppressed, or there is clinical or morphological suspicion:

These are very common. The are covered in a separate article entitled colorectal tumours.

Described in detail in the appendix article.

The histology of bowel transplant rejection is identical to GVHD - see GVHD.

This section deals with chronic constipation that has no apparent cause.