Difference between revisions of "Gross pathology" 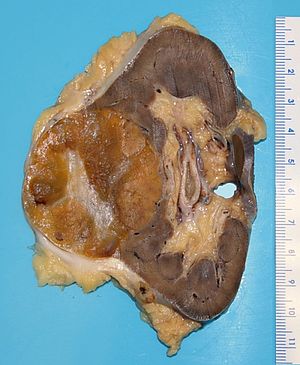 A kidney tumour (renal oncocytoma) at the time of grossing.

The process of cutting up specimens is known as grossing (North American term), cut-up or macroscopic cut-up (Australian term).

Usually referred to simply as opening.
May go by the term freshing.

Gross only specimens are examined only at the grossing bench; no microscopy is done. Which specimens are considered "gross only" typically depends on institutional policy.[1]

This article is discusses generalities in grossing.

This is a long list of things that can be identified with a reasonable certainty on gross.