Course Neuropathology is a online collection of images and descriptions of specimens used for teaching medical students and residents.

This page is divided into following courses:

This H&E stain displays parts of a moderately cellular tumor growing with ovoid elongated nuclei (Pictures 1+2). There are no clear-cut cell borders discernible in light microscopy. This interveawing is called a syncytium. WHO Grading of the tumour is dependent of the mitotic activity (Picture 3) or histological hallmarks such as prominent nucleoli, high nuclear to cytoplasmic ratio, CNS infiltation etc.. Focal nuclear clearing (Nuclear pseudoinclusions, Picture 4+5) are typical cut phenomenon. The round calcified inclusions (Psammoma bodies) are characteristic for a meningioma.

This specimen contains fragments of a diffusely growing tumor with only slight inclreased cell density and focally microcysts withing the neuropil background (Picture 1). Although many of the astrocytic tumour cells look quite similiar there is increased pleomorphism, mostly larger and a more dense chromatin. There are no mitoses seen in this tumour (Picture 2). The tumour borders are not clear, there is just a decrease of cell density a the tumor infiltration zone. In this area one is not always sure which cells are still neoplastic and which cells are normal or reactive astrocytes of the normal brain (Picture 3).

The sample consists mainly of tumour particles that show extensive calcifications which are already visible at low magnification (Picture 1). The tumour cells show perinuclear halos - a fixation artefact seen typically in oligodendrogliomas (Picture 2). This "fried-egg" appearance at higher cell density results in the so called "honeycomb" appearance. Oligodendrogliomas usually have monomprhic round nuclei with scant chromatin. Between the tumour cells delicate capillaries are present. In contrast to astrocytomas the tumor border is more pronounced, the infiltrative pattern is less evident (Picture 4). In absence of necrosis and almost no mitotic activity this tumour corresponds to WHO Grade II.

This autopsy specimen from cerebral hemisphere shows diffuse clouding of the arachnoidea and pia mater by a dense cellular infiltrate as seen in this low magnification (Picture 1). In higher magnification the infiltrate consists mainly of neutrophil granulocytes (Picture 2). Because the granulocytes are also seen along capillaries in the Virchow-Robin space, we consider this a meningoencephalitis (Picture 3).

This autopsy specimen was sampled in coronar section from the optic chiasm and displays numerous granulomas (Picture 1). In the brain parenchyma mutlifocal smaller infiltrates consisting of lymphocytes and monocytes. The adjacent astrocytes show reactive changes with broadly swollen, pink cytoplasm ("gemistocytes", Picture 2). The granulomas are surronded by lymphocytes and in between so called epitheloid cells with chromatin-dense, elongated, sole-like nuclei and occassionally Langhans giant cells (Picture 3). The center of the granuloma is often necrotic, such "caeseating necroses" are typical for tuberculous meningitis (Picture 4).

At low magnification a cavity whithin brain tissue is evident (Picture 1). The necrotic core, filled with pus, consists mainly of neutrophils and macrophages. The abscess is surrounded by a fibrous capsule consisting of capillaries, macrophages, mononuclear cells, and reactive astrocytes (Picture 2). Collagen is produced by vascular cells and walls off the infection (Picture 3). Special stains (or molecular analyses) are needed to identify the causative agent.

On this cross section through the spinal cord the motor neurons of anterior and posterior horn are visible with cresyl violet staining (Picture 1). At higher magnification microglial nodules are present (Picture 2). These contain macrophages that phagocytose nerve cells (neurononophagia, Picture 3).

Cells and tissues have numerous antigenic structures that serve as a target for the receptors of an adaptive immune response. These structures are found at cell surface, in cytoplasm or organelles (including the nucleus). Several antigens are found only in a specific tissue type (ie. epithelial cells) or at a given stage of the cell cycle (proliferating cells). Because human antigens are of diagnostic and/or prognostic relevance, especially in cancer diagnostics, they are often called biomarkers. Since its introduction in 1974 [1], the visualization of epitopes in paraffin-embedded specimens through immunohistochemistry has become standard practice in routine neuropathology supporting the morphology at light-microscope level.

A by far incomplete overview of antibodies used for immunohistochemical staining are found here.

The tissue microarray method is sed mainly in research because of following advantages: [2]

This section deals with normal cellular constituents of the CNS. 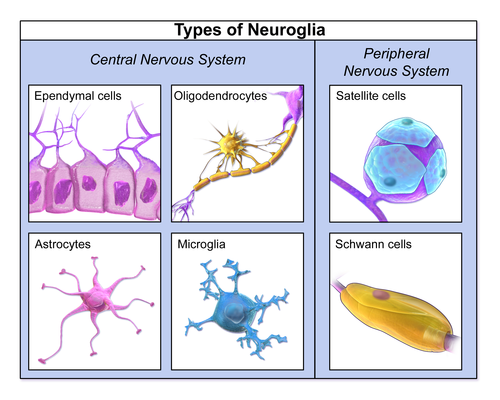 Neurons are often very large cells, with angled edges and abundant cytoplasm that contains Nissl substance (granular perinuclear material = rough endoplasmic reticulum). The round nucleus of larger cells has weak chromatin and a prominent nucleolus. Some neurons such as the granular layer in the cerebellum are quite small instead. There are several types of glial cells. Oligodendrocytes have a small round, centrally located nucleus (lymphocyte-like). The cytoplasm is often glassy. Astrocytes have am irregular non-ovoid nucleus. They are often close to blood vessels where the form the blood-brain barrier. Their stellate cytoplasmic processes are normally not visible in normal neuropil backgeound. Ependymal cells are a simple ciliated cuboidal epithelium psitioned at the surface of the ventricles and central canal. Cells of the choroid plexus. are specialized ependymal cells surrounding a core of capillaries and loose connective tissue and are located within the ventricels where they produce the cerebrospinal fluid. Microglia are the immune-competent cells of the brain (macrophages). They often have vesicles and are rarely seen in normal tissue

The exact classification of brain tumours is essential for proper treatment of patients. Although morphological evalutaion of the H&E stained tumour specimen is a crucial first step, subsequent immunhistochemical stains and molecular analyses help to secure the diagnosis. The following five antibodies: GFAP, MAP2, ATRX, IDH-1, pan-Cytokeratin and Ki-67 (MiB-1) allow for good classification of the most common tumours observed in the brain. A short introduction:

Glioblastoma is a pleomorphic astroglial tumor with endothelial proliferations and necrosis. As expected by a malignant tumor, the number of proliferating cells (MIB-1) is high. The tumour cells often stain for GFAP. There is no ATRX loss and the IDH-1 R132H mutation is absent (negative staining).

Oligodendroglioma is a diffuse geowing glial tumour with clear cell morphology. In WHO grade II the MIB-1 proliferation index is rather low. GFAP stains the neuropil background and minigemistocytes (if present). There is no ATRX loss. The vast majority of oligodendrogliomas stain positively for IDH-1 R132H mutation.There is no expression of epithelial markers (panCK).

Brain metastases are usually circumscribed lesions that infiltrate the brain parenchyma. Most metastases are carcinomas as in this case of a renal clear cell carcinoma. At the first glance, it's morphology is similiar to oligodendroglioma, but absence of GFAP and postive cytokeratin staining confirms epithelial origin. As expected from a malignant tumor, MIB-1 proliferation is elevated. There is no ATRX loss and no IDH-1 mutation present.

A descriptive overview of various brain tumours is found here.

Because IDH-1 and IDH-2 mutations are found in up to 80% of astrocytomas and oligodendroglioma, IDH-1 R132H (which detects only the R132H substitution [5]) stained negative cases are sequenced for other rare mutations that include IDH1 R132C or IDH2 R172K among others. These mutations are not only useful in differential diagnosis of brain tumours but also prognostic, because tumours carrying a IDH-1 or IDH-2 mutation usually show a more favourable course than their wild-type counterparts [6].

Oligodendrogliomas show a more favourable course and therfore are treated differently than astrocytomas. A clear separation of these two entities is important, because H&E morphology is not always convincing. Succesful treatment depends on allelic losses on chromosomal arms 1p and 19q in oligodendroglioma that can be obtained by copy-number analysis or microsatellite PCR. By combining LOH (loss of heterozygosity) 1p/19q and ATRX status it is also possible to place the mixed oligoastrocytomas into the astrocytoma or oligodendroglioma group.

Immunofluorescence is a technique used for light microscopy with a fluorescence microscope (usually a confocal microscope). This technique uses the specificity of antibodies to their antigen to target fluorescent dyes to specific biomolecule targets within a cell, and therefore allows visualisation of the distribution of the target molecule through the sample. The typical approach uses a unlabeled first (primary) antibody that specifically binds the target molecule, and the secondary antibody, which carries the fluorophore, recognises the primary antibody and binds to it. Advantages of immunofluorescence are the usually better resolution of the signals compared with standard light-microscope stains and the possibility to combine antibodies of different species to target two or more epitopes with different fluorophores. These different signals can be merged into a single image.

The skeletal muscle is anchored by tendons (or by aponeuroses at a few places) to bone and is used to effect skeletal movement such as locomotion and to maintain posture. Striated or skeletal muscle only contracts voluntarily, upon influence of the central nervous system.Skeletal muscle is further divided into several subtypes:

Muscle biopsies are performed to obtain a specific diagnosis in persisting weakness or muscle pain.