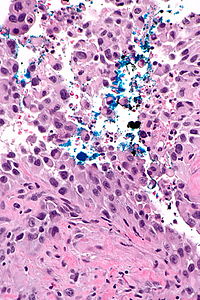 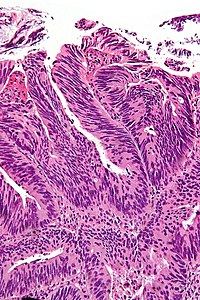 The surgical margins, often simply referred to as margins, are the set of surfaces that were cut by the surgeon in order to remove the specimen from the body. The distance between the tumour and the margin is called the surgical clearance, a term that may be used interchangeably with the term surgical margin.[1] Margins are important as an incompletely removed disease process may lead to re-occurrence.

Unfortunately, there is no universal definition for positive margin.

Definitionally, there is agreement that "tumour touching the edge of the specimen" is a positive margin.[3][4]

Perhaps confusing is that: a [pathologically] clear margin may be defined as being [oncologically] a positive margin, e.g. tumour not touching the ink of an inked margin - but less than 1 mm from the ink - may be a "positive margin".[4]

There is limited advice on how to deal with a fragmented or incised specimen.

If the specimen can be "put back together", it is reasonable to assess the margin and comment on the limitation.

If the specimen is received sectioned or fragmented, this should be noted, as this will limit the ability to evaluate the status of margins.

Features of the true margin:

A re-excised (previously) positive margin is negative for tumour

It occasionally happens that a re-excised margin specimen is negative for tumour.